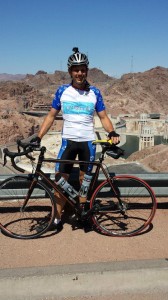 Me at the Hoover Dam

I lost my stabilisers when I was 4 and haven’t really looked back, too busy trying to avoid crashing. In my youth, I cycled everywhere, aged 9, I used to go off for what seemed the whole day with a gang of mates. Then into my teenage and early twenties, I got a Halfords Olympic 5 speed racer. 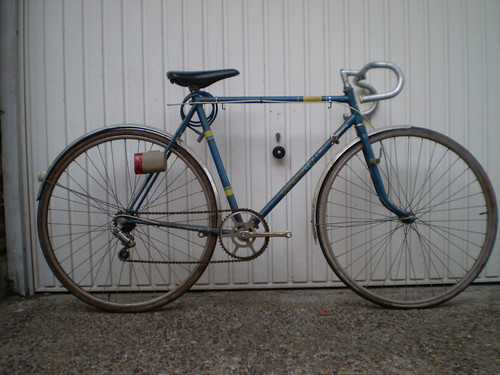 Mine was green, I even used to scrabble it over somewhere call the Devils Dip in Nonsuch Park. Later, a group of mates used to go on longer rides that were called ‘A Pint and Back’, these soon turned into ‘A Pub and Back’. The back being a lot slower than the out.

Eventually, cars and girls took my interest and the bike got forgotten for a number of years, it started to rust and the tyres went flat. Fast forwards to being married and living in Tolworth, within striking distance of the Thames towpath or the Surrey lanes. The idea of getting a ‘Mountain Bike’ and cycling with my new wife seem very appealing. I duly bought a Specialized Hardrock. My wife’s parents lived in the Highlands of Scotland and the bikes were taken north on a number of occasions to find some mountains to climb. It was all great fun, but nothing serious.

With life changes and the focus shifting away from cycling to other sports, such as rowing at Kingston Rowing club and then Skiffing at Ditton Skiff and Punting Club. House moves meant the car was used more than the bike and once again the tyres went flat. Time moves forwards and a new wife and living even closer to the Thames, I still have the Hardrock and cycling and skiffing are now the pleasurable past-times.

I start to row with the local GP Dr David Matthews and he regularly talks about his Wednesday ride. This interests me and we arrange a ride one weekend. Dr D turns up on his Specialized Roubaix and we head off with me on the now tired Hardrock. And little did I know what I had just started. We only do 20 miles, Dr D had to wait at the top of every slight incline, but the Bug had Bit. I changed jobs and started to work in Kingston, thus cycling most dry days. It’s not a good look turning up to work dripping wet.

Then another life change and I’m now living in Cheam and in need of a better commuter bike. Again Specialized is the company of choice and this time a Specialized Sirrus Comp.

I’m now riding regularly to work and with Dr D at weekends. David and I are even talking about doing Land End to John O’Groats. We are still regularly skiffing and aware that the boat shed is getting a large number of bicycles in it. Then it happens, Nigel Shipley, Matt Pears and Andrew Turner form a cycling group and very quickly Dr D and I join in. Initially, it is call Dittons Wheelers. But it is soon changed to the now famous Dittons Velo. David Marsden joins in, I build a website and the rest as they say is history.

Whilst all this is going on. My daughter joins a new free school in Cobham and one of the fathers is looking for people to join a proposed cycling holiday/trip from New York to San Francisco. After discussing the project with Dr D, Lands End to John O’Groats is postponed whilst I join the American adventure. Dr D does join in a number of the training rides but doesn’t come on the trip. It has been an ambition of mine to cross the USA by road. I did think I might do it on a motorbike, but this sounded much more fun, 5 Guys, 1 RV (recreational vehicle) and 1000 miles of some fantastic cycling. During the training and trip I lost 13kg and became the fittest I have ever been.

If you would like to find out more about the trip please visit the trip website. (www.nyc2sfb.co.uk ). There is a blog, videos and pictures.

During the build up to the trip I realised that I was going to need a different bike as the hybrid was not going to be quick enough, especially up some of the mountains in the Rockies. So I purchase an Orbea Aqua.

It has proved to be a very comfortable bike and it is pretty much now as it was when I bought it, apart from a more comfortable saddle. I also loved the colour scheme, charcoal and orange.

As part of the training for the ride Dr D and I completed one of his ambitions. It was to cycle from his daughters home in Ivybridge near Plymouth to his home in Thames Ditton. We completed the ride on the hottest weekends in 2013 and it is still one of the best 2 days riding I have done. On day one we were on the road for nearly 13 hours and climbed some crazy hills and covered nearly 130 miles. Day two was a little easier, but we still did over 100 miles. Check out the days Strava readings.

Since the return from the America Ride, I have watch Dittons Velo grow from strength the strength. It is a delight to be part of such a great bunch of cyclist. Cycling is a big part of my life and gives me great joy.