Firstly I wanted to say a big thank you to those who have sponsored me for my recent cycle from Guildford to Bordeaux.

I thought it would be interesting if I recounted my adventures; it is important to note that the entire trip was organised expertly by my friend Duncan Pike and totalled around 400 miles excluding the ferry crossings. Hotels and restaurants were all top class and helped our recovery post-ride! 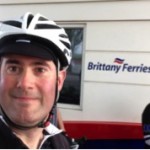 12 cyclists of varying abilities set off from Guildford at 1pm, and immediately hit a problem as one of the groups tyres decided to explode about 1 mile from the start!  Fortunately we had a spare tyre with us so we were back on the road without losing too much time.  Lesson:  Don’t mess with your tyres 15mins before starting a long trip.

We made it up Harting Down which is a reasonable climb and got to the ferry at Portsmouth with plenty of time and settled into post-ride recovery.

After a rough overnight crossing due to high winds we arrived early in St.Malo, and all 12 of us set off on a 65 mile slightly hilly route to a town called Vitre.  The headwinds were starting to build on this day (15-20mph) and with 3,500ft of climbing and loaded panniers it was starting to get real.

This was probably the toughest day of the entire trip, not only was this the longest distance I had ever attempted it was

also one of the hilliestwith over 4,000ft of hills to do.  My kit wasn’t yet dry from the previous day, so putting on cold wet clothes was no fun.  And to top it off the headwind had increased to 20-40mph, we tried various peloton techniques in order to minimise the effort and keep progress up.  We arrived quite late in Cholet after around 8hours in the saddle.

y this point we had also settled into the French way of cycling;

the roads were fantastic, and the drivers were generally patient. 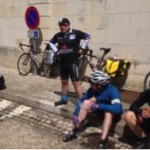 Another long day, and the headwinds were still gusting up to 40mph.  But we were starting to make serious progress south so the temperatures started to increase which meant jackets came off and the sun came out.  This was a typical improvised lunch stop at a town en-route:

This day involved much less climbing, and a nice ferry trip from Royan to the Medoc.
Although it was still another 80+mi day it felt much better as the wind eased and the terrain was flattening out.  Our average speed improved and we ended the day in the middle of the vineyards in Pauillac feeling great.

Once on the Medoc, we passed through some classic appellations and past chateaux such as St.Estephe and Chateaux Lafite-Rothschild.

A procession ride into Bordeaux, with a nice stop at Chateaux Margaux. A minor puncture on the way into the city, but that couldn’t stop us.

And finally we made it to the finish in Bordeaux! 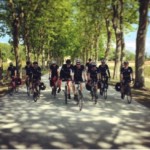 After a rest day in Bordeaux we all set off home by various means.

So all in all, a fantastic trip totalling 405 miles or as I prefer 650 kilometres, at times it was massively challenging primarily due to the constant headwinds for over 300 miles.  We managed to raise significant funds for the Fountain Centre in Guildford and reached our goal of £10,000 before we set off.  Apparently this is the single largest private donation they have ever received and we are still receiving donations.  So to that end, if you would like to donate then please follow the link: https://www.justgiving.com/Guildford-Bordeaux 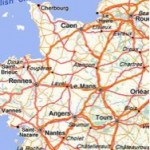