11 met up at Café Rouge including David Marsden who was off the bike with a cold but joined for a pre-ride coffee.

It was SimonH’s first Dittons Velo outing on his road bike, so great to see him getting back into the swing of things.

The latter group meandered to the bottom of Staple Lane (where they met the second group coming down) exchanged pleasantries and then continued up and then down via Green Dean and back to Esher for a caffeine refuel at G!ro.
Hobbs tried out Nigel’s spare bike and seemed to enjoy the experience. Tim sporting his usual orange attire decided to keep things ‘simple’ and stay in the same gear for most of the ride.

Andrew and Brett as the faster group had a good 32mile ride out to Box Hill via Claygate and Polesden Lacey.  They were forced to take the descents very  carefully as it was very slippery.  After a short break at the view point for half a banana each they headed back via Headley with a good climb up out of Langley Vale to the top of Epsom Downs. In AndrewT’s words: “Nothing too challenging after my holiday but good company and a few fast bits along the way. Beautiful views” 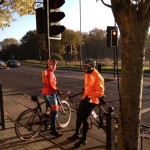 Andrew and Brett setting out as the faster group 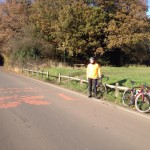 Brett, still at the top of Box Hill, waiting for AndrewT to catch up perhaps? 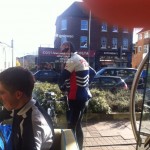 Andrew has had enough and is off home. Leo enjoys a well-deserved post-ride hot chocolate